A founder and leader of contemporary US feminism, Robin Morgan has also been a major presence in the international Women’s Movement for more than 35 years.

During the 1960s, she was active in the civil rights movement in CORE (Congress on Racial Equality) and SNCC (Student Nonviolent Coordinating Committee). and in the anti-Vietnam War movement. But by the late 1960s she was already a founding member of such radical feminist organizations as New York Radical Women and W.I.T.C.H. (the anagram was adaptable, representing Women’s International Terrorist Conspiracy from Hell, Women Inspired to Commit Herstory, Women Interested in Toppling Consumer Holidays, etc.). 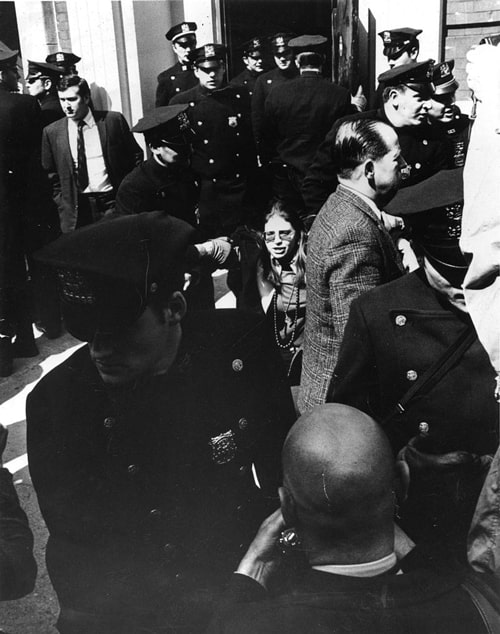 Morgan organized the September 1968 protest at the Miss America Pageant in Atlantic City, the first major public action of contemporary feminism. That year she co-founded W.I.T.C.H., a radical feminist group employing guerrilla-theater actions to call attention to sexism. Morgan designed the universal logo of the women’s movement, the woman’s symbol centered with a raised fist. She coined the word “herstory” and has been credited with originating numerous famous feminist phrases, including “The personal is political,” and “Pornography is the theory; rape is the practice.”

With the royalties from her first anthology, Sisterhood Is Powerful (1970), Morgan founded the first feminist foundation in the US, The Sisterhood Is Powerful Fund, which provided seed money grants to hundreds of early women’s groups throughout the 1970s and 1980s. She led the women’s takeover of the leftist newspaper Rat in 1970, memorably breaking with the “toxic sexism of the left” in the first women’s issue of the paper, via her famous essay, “Goodbye to All That.” (During the 2008 presidential primaries, Morgan wrote a fiery “Goodbye To All That #2” about the misogynistic rhetoric on and treatment of Hillary Rodham Clinton; the article quickly went viral on the Internet—as did her “Letters from Ground Zero” written after 9/11 and published at the back of The Demon Lover: The Roots of Terrorism.)

Traveling the world to report on women, she has met with female fighters underground in the Philippines, HIV organizers in the favelas of Rio de Janeiro, potters in the villages of Indonesia, Nepalese rice farmers, and generationally indentured servant women in the townships and farms of South Africa. In 1986 and 1989 she spent months investigating the conditions of Palestinian women in Jordan, Lebanon, Egypt, Syria, West Bank, and Gaza refugee camps.

Co-founder (with the late Simone de Beauvoir) and President of The Sisterhood Is Global Institute, the first international feminist think tank, and co-founder (with Jane Fonda and Gloria Steinem) of The Women’s Media Center, she co-founded or has served on the boards of the Feminist Women’s Health Network, the National Battered Women’s Refuge Network, Media Women, the National Network of Rape Crisis Centers, the Feminist Writers’ Guild, the Women’s Foreign Policy Council, and the National Museum of Women in the Arts.

A contributing editor to Ms. Magazine beginning in 1979, she served as Editor in Chief from 1989-1994, re-launching the magazine as an international ad-free bimonthly publication, leading to financial success for the magazine and numerous awards, including Editorial Excellence by Utne Reader, and the Exceptional Merit in Journalism Award by the National Women’s Political Caucus. She resigned in 1994 to become Global Consulting Editor.

An invited speaker at every major university in North America, she has traveled—as organizer, lecturer, journalist—across Europe, to Australia, Brazil, the Caribbean, Central America, China, Indonesia, Israel, Japan, Nepal, New Zealand, Pacific Island nations, the Philippines, and South Africa. She has been a Guest Professor or Scholar in Residence at a variety of academic institutions. In 1973 she was Guest Chair for Feminist Studies at New College of Florida, and The Center for Critical Analysis of Contemporary Culture at Rutgers University hosted her as a Visiting Professor in 1987. She was a Distinguished Visiting Scholar in Residence, Literary and Cultural Studies at the University of Canterbury, Christchurch, New Zealand in 1989, Visiting Professor in Residence at the University of Denver, Colorado, in 1996; and Distinguished Lecturer at the University of Bologna in Italy, at their Center for Documentation on Women in 2000. She was awarded an Honorary Degree as Doctor of Humane Letters by the University of Connecticut at Storrs in 1992. The Robin Morgan Papers are archived at the Sallie Bingham Center for Women’s History and Culture at Duke University.

“The simple fact of choosing one’s clothes becomes a political semaphore. Silkscreened T-shirts pay homage to the literary works of Robin Morgan, the American feminist poet, with elements from Sisterhood is Powerful (1970), Sisterhood is Global (1984) and Sisterhood is Forever (2003), which celebrate the concept of sorority.”

Since August 2012, she has been the writer, producer, and host of the weekly radio and online webcast and podcast program, Women’s Media Center Live with Robin Morgan, featuring her own political commentary plus literary and political guests.

Listen to the Podcast